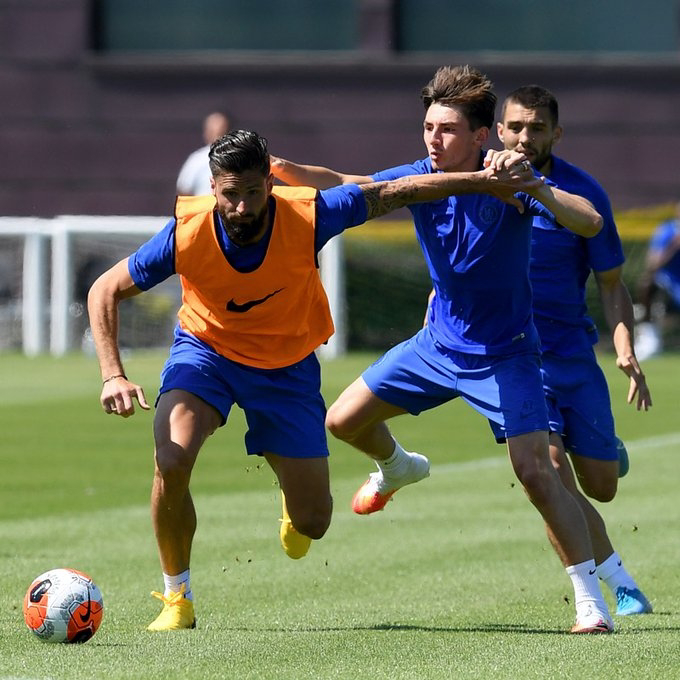 When football ground to a halt in early March due to the coronavirus pandemic, Olivier Giroud had more reason than most to bemoan the unfortunate timing of the pause to play. The 33-year-old was enjoying his longest run in the team under Frank Lampard, having started five consecutive matches in all competitions, scoring twice against Tottenham and Everton.

In fact, Giroud had clocked over 60 per cent of his total minutes this season and two of his three club goals in those five games, stepping up in the absence of Tammy Abraham through injury and retaining his place at the apex of our attack once the England international returned.

However, the Frenchman is not one to bemoan his luck. He has been hailed by Lampard as a model professional, setting the example both on and off the pitch.

Now back at Cobham and working within phase two of the Premier League’s training guidelines, Giroud continues to lead by example and explains how grateful he is to be back at work with his fellow players.

‘We’re working hard and it really feels good to be back on the pitch, to get to see team-mates again and to simply be playing football, kicking the ball and scoring goals again,’ he says.

‘I’d really missed it a lot. That being said, it’s very unique but it’s fine and spirits are high.’

GROUD HAS BEEN BACK IN TRAINING AT COBHAM

The players are back training but sessions are far from what they are used to, although restricted contact training has been approved in recent days which means that larger group work should be possible.

‘There are quite a lot of differences,’ Giroud reveals. ‘We’ve been working in groups of five and then we need to maintain a two-metre minimum social distance between each other, meaning no contact.

‘Something else that’s changed compared to usual pre-seasons is that we only get 15 minutes of treatment after training. Normally in pre-season, you’re very demanding with your muscles and use them a lot, especially when you haven’t been training for over two months.

‘Muscles strain and creak but we respect the rules from the Government and the Premier League. I’ll admit that if I could have more care and treatment to look after my body, it would be better.