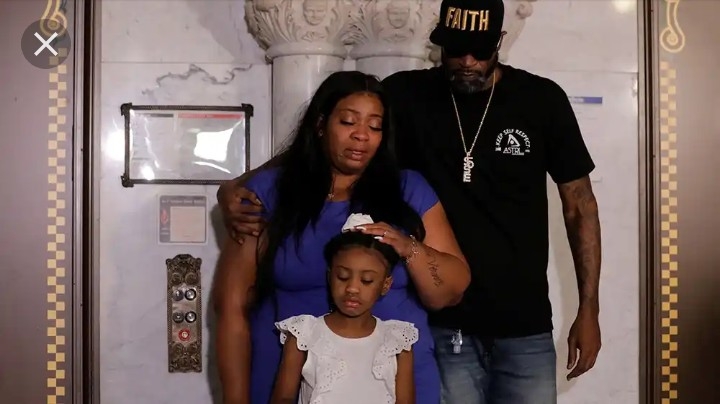 Democratic US presidential candidate Joe Biden has said the late George Floyd will "change the world."
Following a private meeting with Mr Floyd's family in Houston, Texas, to offer his sympathies, Mr Biden told CBS news his death was "one of the great inflection points in American history".
The killing of African American George Floyd at the hands of a white officer has fuelled global protests.
A private funeral service will be held in Houston later on Tuesday.
What did Biden say about Floyd's family?
"They're an incredible family, his little daughter was there, the one who said 'daddy's going to change the world', and I think her daddy is going to change the world," Mr Biden told CBS anchor Norah O'Donnell.
"I think what happened here is one of the great inflection points in American history, for real, in terms of civil liberties, civil rights and just treating people with dignity." What was said at the funeral?
The service was held at the Fountain of Praise church, attended by some 500 guests including politicians and celebrities.
"George Floyd was not expendable - this is why we're here," said Al Green, the local Democratic congressman. "His crime was that he was born black."
Veteran civil rights activist Reverend Al Sharpton told the service: "All over the world I see grandchildren of slave masters tearing down slave masters' statues."
Talking about Mr Floyd's difficult life, he said: "God took the rejected stone and made him the cornerstone of a movement that's gonna change the whole wide world."
In Minnesota, Governor Tim Walz called on people to honour the funeral by observing silence for eight minutes and 46 seconds, the time Mr Floyd was pinned to the ground before he died.
world News